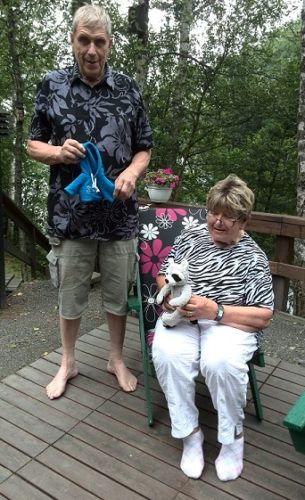 How great it is that raccoon is selected to the mascot of the World Parkinson Congress! Which species would be more suitable for the task?

Parky, as a raccoon living in a family with Parkinson’s I would like to send via you my greetings to the congress participants from all parts of the world.

First of all, Parkinson’s disease is largely a matter of adaptation, a bit like a raccoon’s huge success in adapting to different living conditions, even in co-existence with humans in the same territory.

Sometimes you get things to your life that you would not necessarily choose to yourself. Did I want to move to the human apartment in Espoo? The idea seemed at first crazy! Yea, I am a wild animal. I belong to nature. However, I was born in captivity. In the nature I would have survived up to the first frosts, if I had not been hit by a car. Unexpected circumstances, therefore, there will be for all of us. For some, it is Espoo, Finland, to another it may be Parkinson’s disease. We raccoons adapt to almost any sort of circumstances. People with Parkinson’s equally have to adjust to living full-time with changing symptoms and feelings.

Approval of this matter takes time. One moment you resist thoroughly and fight until you see dark in your eyes. When you finally realize that you can’t get rid of the condition, you can focus on searching with your new partner the most suitable experiences among life styles, values and all that which give you joy.

Secondly, I have watched admiring the Parkinson’s club members’ strong communities. We raccoons on the contrary prefer to be alone, and puppies are on responsible of their mothers.

The Parkinson’s community works another way. My adoption grandma Ritva Helameri is toiling as a chairman of the East Helsinki Parkinson’s club, so that everyone could have more fun with Parkinson’s. The club offers information, support and joy for the people with Parkinson’s and their love ones. After one family member is diagnosed with Parkinson’s, the whole family and all friends will be involved.

People are bowling, eating together, some travel on the other side of the world to meet other people with Parkinson’s. When the people with Parkinson’s of the whole world meet in September, there is indeed a very unique opportunity to network globally.
If I only would get the same blue hoodie, which I saw you are wearing, with text “WPC 2016 in Portland”, I would not take it off ever again.