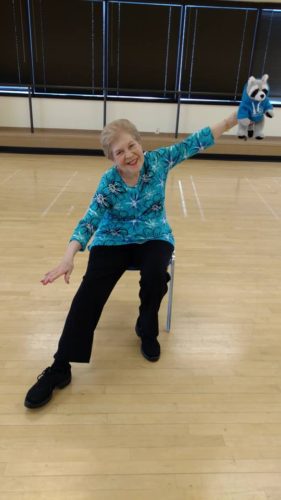 I was diagnosed with Parkinson’s Disease in January 2009. Prior to that time, I had been actively taking ballet classes, something I had enjoyed since the age of seven, including dancing with a ballet company and teaching dance to children and adults. When my balance became compromised with the onset of Parkinson’s, I searched for a substitute for the joy that dance had always provided in my life. I discovered the Dance for PD classes offered three times a week in Dallas taught by Misty Owens. The joy has returned, albeit in a more conservative way of movement, and Parky came with me to class one day. My classmates loved having him, and he helped spread the word about the upcoming World Parkinson Congress. Since I also try to include other types of exercise to keep Parkinson’s at bay, I also have pictures of Parky exercising with me at a Pilates studio, and at occupational therapy. I plan on bringing him with me to the World Parkinson Congress in September

Parky in Japan
Story By Matthew Stevens:
Hello! I met Parky when he visited us in Kyoto as he was scoping out locations for future WPC Congresses. I work for the Kyoto Convention Bureau and it is...